From Wikipedia, the free encyclopedia
Jump to: navigation, search

A spider in Baltic amber
The evolution of spiders has been going on for at least 400 million years, since the first true spiders (thin-waisted arachnids) evolved from crab-like chelicerate ancestors. Today, there are 42,473 described spider species within the diverse phylum of arthropods.
Major developments in spider evolution include the development of spinnerets and silk secretion. Among the oldest known land arthropods are Trigonotarbids, members of an extinct order of spider-like arachnids.
Sharing many superficial characteristics with spiders, Trigonotarbida were terrestrial, respired through book lungs, and walked on eight legs with two additional legs adapted to use around their mouth. Arguments still remain open as to whether they possessed the ability to create silk. This had been popular thought for quite some time, until an unpublished fossil was described with distinct microtubercles on its hind legs, akin to those used by spiders to direct and manipulate their silk.
Regardless, Trigonotarbida are not considered true-spiders. They are generally accepted as an independent early offshoot within the Arachnida clade, and not directly ancestral to modern spiders.

At one stage the oldest fossil spider was believed to be Attercopus which lived 380 million years ago during the Devonian. Attercopus was placed as the sister-taxon to all living spiders, but has now been reinterpreted as a member of a separate, extinct order Uraraneida which could produce silk, but did not have true spinnerets. 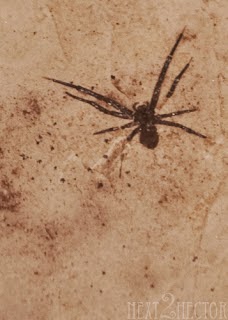 The oldest true spiders are thus Carboniferous in age, or about 300 million years. Most of these early segmented fossil spiders from the Coal Measures of Europe and North America probably belonged to the Mesothelae, or something very similar, a group of primitive spiders with the spinnerets placed underneath the middle of the abdomen, rather than at the end as in modern spiders. They were probably ground dwelling predators, living in the giant clubmoss and fern forests of the mid-late Palaeozoic, where they were presumably predators of other primitive arthropods. Silk may have been used simply as a protective covering for the eggs, a lining for a retreat hole, and later perhaps for simple ground sheet web and trapdoor construction. 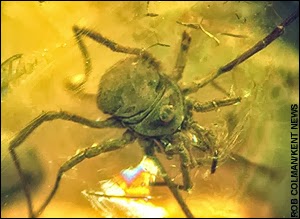 As plant and insect life diversified so also did the spider's use of silk.Mygalomorphae and Araneomorphae) appeared more than 250 million years ago, presumably promoting the development of more elaborate sheet and maze webs for prey capture both on ground and foliage, as well as the development of the safety dragline. The oldest mygalomorph, Rosamygale, was described from the Triassic of France and belongs to the modern family Hexathelidae. Megarachne servinei from the Permo-Carboniferous was once thought to be a giant mygalomorph spider and, with its body length of 1 foot (34 cm) and leg span of above 20 inches (50 cm), the largest known spider ever to have lived on Earth, but subsequent examination by an expert revealed that it was actually a middling-sized sea scorpion. 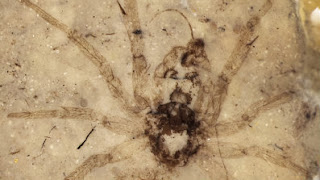 Spiders with spinnerets at the end of the abdomen ( 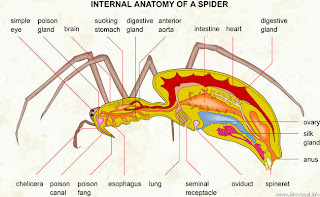 By the Jurassic, the sophisticated aerial webs of the orb-weaver spiders had already developed to take advantage of the rapidly diversifying groups of insects. A spider web preserved in amber, thought to be 110 million years old, shows evidence of a perfect "orb" web, the most famous, circular kind one thinks of when imagining spider webs. An examination of the drift of those genes thought to be used to produce the web-spinning behavior suggests that orb spinning was in an advanced state as many as 136 million years ago. One of these, the araneid Nephila jurassica, from about 165 million years ago, recorded from Daohuogo, Inner Mongolia in China, is the largest known fossil spider.[1]
The 110-million-year-old amber-preserved web is also the oldest to show trapped insects, containing a beetle, a mite, a wasp's leg, and a fly.[2] The ability to weave orb webs is thought to have been "lost", and sometimes even re-evolved or evolved separately, in different breeds of spiders since its first appearance.
A list of fossil spiders, down to species level, can be found at the American Museum of Natural History's website.[1]

From Wikipedia, the free encyclopedia
Jump to: navigation, search
Meganeura is a genus of extinct insects from the Carboniferous period approximately 300 million years ago, which resembled and are related to the present-day dragonflies. With wingspans of up to 65 cm (25.6 in), M. monyi is one of the largest known flying insect species; the Permian Meganeuropsis permiana is another. Meganeura were predatory, and fed on other insects.
Fossils were discovered in the French Stephanian Coal Measures of Commentry in 1880. In 1885, French paleontologist Charles Brongniart described and named the fossil "Meganeura" (large-nerved), which refers to the network of veins on the insect's wings. Another fine fossil specimen was found in 1979 at Bolsover in Derbyshire. The holotype is housed in the Muséum national d'histoire naturelle, Paris. 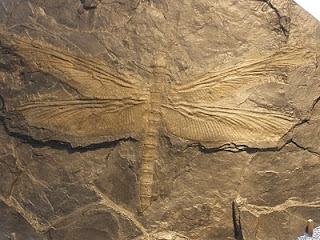 Controversy has prevailed as to how insects of the Carboniferous period were able to grow so large. The way oxygen is diffused through the insect's body via its tracheal breathing system puts an upper limit on body size, which prehistoric insects seem to have well exceeded. It was originally proposed (Harlé & Harlé, 1911) that Meganeura was only able to fly because the atmosphere at that time contained more oxygen than the present 20%. This hypothesis was dismissed by fellow scientists, but has found approval more recently through further study into the relationship between gigantism and oxygen availability.[1] If this hypothesis is correct, these insects would have been susceptible to falling oxygen levels and certainly could not survive in our modern atmosphere. Other research indicates that insects really do breathe, with "rapid cycles of tracheal compression and expansion".[2] Recent analysis of the flight energetics of modern insects and birds suggests that both the oxygen levels and air density provide a bound on size.[3]
A general problem with all oxygen-related explanations of the giant dragonflies is the circumstance that very large Meganeuridae with a wing span of 45 cm (1.5 ft) also occurred in the Upper Permian of Lodève in France, when the oxygen content of the atmosphere was already much lower than in the Carboniferous and Lower Permian.[4] 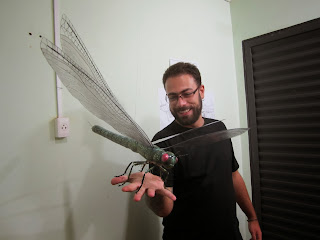 Bechly (2004) suggested that the lack of aerial vertebrate predators allowed pterygote insects to evolve to maximum sizes during the Carboniferous and Permian periods, maybe accelerated by an evolutionary "arms race" for increase in body size between plant-feeding Palaeodictyoptera and Meganisoptera as their predators.[5] 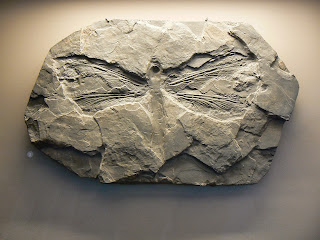 Insect "Frankensteins" have been discovered among fossils from a deposit in Brazil. The prehistoric creatures had the wings and middle-body segments of a dragonfly's, wing veins arranged like a mayfly and a praying mantis's forelegs. 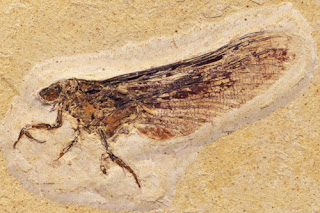 "It is a very strange mix of characteristics that are otherwise only known for the unrelated insect groups," said one of the researchers to discover this new group of insects, Günter Bechly, a paleontologist at the State Museum of Natural

History in Stuttgart, Germany.
From two adult and about 30 larval fossils that came from the Brazilian fossil deposit and are now contained in collections around the world, the researchers created a new order — a broad category that can contain many species — called Coxoplectoptera. This newly named group of insects is long gone; it has no modern descendants, and the fossils date back 120 million years to the early Cretaceous Period. [See image of fossil insect] 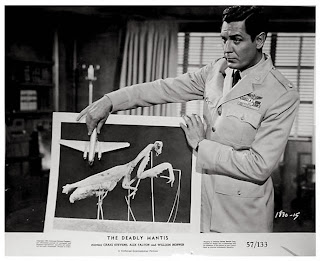 A preserved Coxoplectoptera adult.
Credit: Staatliches Museum für Naturkunde Stuttgart (Germany)
View full size image
Bechly and fellow discoverer Arnold Staniczek, an entomologist at the museum, realized they had found something special when they came across one of the fossilized adult insects already in the museum's collection while working on a book on the Crato fossil deposit in Brazil from which it came. [Gallery of Colorful Insect Wings]
This deposit has produced tens of thousands of well-preserved fossils during a crucial period for insect evolution, according to Bechly.
Each larva had a body shape that is taller than wide, resembling that of a freshwater shrimp. Based on the larva's shortened mid and hind legs, its thick exoskeleton, beak, large antennae and preying-mantis-like forelimbs, these young insects most likely burrowed part way into the mud underwater and waited to ambush smaller insect prey as they passed, the researchers speculate.
Although it shares

characteristics with a number of other insects, Coxoplectoptera's closest living relatives are mayflies. These modern, ephemeral insects die after a brief adult life, of two to three hours to two to three days at most, meant only for reproduction. As adults, they do not eat, said Staniczek. Their ancient relative, however, appears to have been more robust, and like juvenile mayflies, carnivorous.
Coxoplectopterahad forelegs designed for catching and gripping, as well as mouthparts capable of eating — something modern mayflies do not have, he said.
These new insects' anatomy may offer a clue to solving a debate about the origin of insects' wings: Did they start out as stiff outgrowths from plates on the back of the thorax, or midsection, or are insect wings derived from mobile

, leg-like appendages? The researchers found evidence in Coxoplectoptera that the wings originated in the back plates; however, these proto-wings appear to have incorporated genes from legs.
The research, with assistance from Roman Godunko, of the University

of South Bohemia in the Czech Republic and the State Museum of Natural History in Ukraine, appears in a special issue of the journal Insect Systematics & Evolution.
Posted by Unknown at 5:36 PM